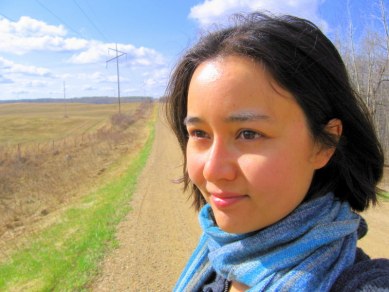 Nova Pon (b. 1983) is a music composer based in western Canada. She has composed in major cities, a small island community, and an isolated forested acreage, in genres ranging from orchestral, chamber music, wind band, and choral works, to collaborations with film and dance, to educational and amateur music making. She enjoys embracing the unique challenges of each project as inspiration for new approaches to meaningful expression.

Nova grew up playing piano and synthesizers in a self-taught way, and composed her first piece at age 10. At age 11, she began playing the flute, and developed a love for chamber music at a young age. Being also drawn early on to creativity and beauty in fields ranging from art, philosophy, literature, and architecture, Nova strives to maintain a childlike sense of playfulness and discovery, and seek the underlying truths which connect great human endeavors.

Her education includes an undergraduate music composition degree from the University of Calgary and graduate studies at University of British Columbia, and workshops including film scoring studies at New York NYU/ASCAP Foundation Film Scoring Workshop. Her music has been performed on four continents, by performers such as Calgary Philharmonic Orchestra, Kensington Sinfonia, Ensemble Resonance, Rubbing Stone Ensemble, Ensemble Paramirabo, and Erato Ensemble, and has been published by Frederick Harris, and recorded on the Centrediscs label and avalable from Naxos Music Library. Nova is also a freelance flutist, and has taught flute and music theory for almost fifteen years. She was made an Associate Composer of the Canadian Music Centre in 2010.

The great composer and omni-musician Paul Hindemith once wrote that “in producing and perceiving music, you must keep your feet on the solid ground of our earth, although with your imagination you may rove the universe.” Whether she is trekking through mountain wilderness, or researching music cognition, improvising with instruments, or improvising in cooking, Nova loves to explore the universe of possibility that nature offers as raw material. Likewise, believing that acoustics and the nature of the human ear offer immense potential for creating sublime and moving music, Nova finds endless fascination with striving to express, with increasing clarity, her sense of life on this earth.